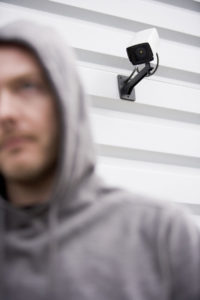 Those handy-dandy smartphone cameras and social media platforms are leading to a rise in arrests. However, these devices require other citizens to be present at the time the crimes are being committed. Fortunately, the increasing popularity and ever-expanding technology of surveillance cameras both inside and outside homes and businesses are available 24-hours a day, regardless of human presence. The following is a breakdown of several recent instances when surveillance footage has led to faster arrests of suspects.

The faces of Derek D. King, 26, and Adam Chavez, 28 were clearly captured on surveillance footage as they tried to destroy security cameras inside the halls of a Greenwood, Indiana storage facility last September.

Despite minimal lighting in the parking lot of the facility, more surveillance cameras easily revealed the license plate and other identifying details of the suspects’ vehicle. The Greenwood police department cited the on-site cameras as instrumental in the identification and December 29 arrest of both men on charges that included burglary, criminal mischief, and criminal trespass.

Just days before Christmas, gas station attendant David Wicks, was set on fire while manning the cash register at Rocky Ledge Shell Station in Johnson Park near Burney, California. At 7:00 p.m. a suspect wearing a rain suit was caught on camera as he entered the convenience store, sprayed the victim with a liquid, set it aflame, and then added additional liquid.

Juan Manuel Venegas, 39, was arrested Thursday, January 19 after footage from cameras installed inside the store revealed that the suspect’s right foot was also on fire as he fled the scene. According to the Redding Record Searchlight, a matching rain suit with burn marks on the right pant leg was found near the scene. DNA analysis later showed that the items belonged to the suspect.

The circulation of a Fresno home’s surveillance system footage on the news and social media led to the arrest of two Clovis, California citizens. Michelle Melikin, 31, and Rodney Keck, 37, allegedly helped steal $2,500 in Christmas gifts from the garage of a home.

The suspects’ location was provided by a tip after the release of the footage and also led to the discovery that Melikin had been squatting in the empty residence. She had even charged rent to two other individuals while living there. The recovery of an SUV allegedly driven by the pair revealed that it had also been stolen from out-of-state.

Suspect Face Clear As He Flees Scene of Fatal Stabbing

58-year-old Marco Perez Diaz was repeatedly stabbed in the head on January 29, 2017, in San Francisco, California. Unfortunately, the victim later succumbed to his injuries at the Bay Area hospital where he had been taken for treatment.

However, surveillance footage located outside clearly captured the face of Aaron Tagata, 23, as he fled the scene just after 9:00 a.m. Tagata is currently being held on a murder charge at the San Francisco County Jail on $8 million bail.

An unnamed 24-year-old woman was allegedly attacked with a hammer by Jae Won Yang, 22, in a Los Angeles Koreatown strip mall on March 10. In footage taken from cameras at the scene, the attacker can be can be seen approaching the female victim, leaving, and then returning a few minutes later with a hammer.

The suspect is then seen hitting the woman in the head at least 20 times before being approached by a security guard and two other good samaritans who approached in order to assist the victim.

Crime is not necessarily growing in the United States, but the increased use of surveillance cameras in homes and businesses make it possible to share crime footage with the world. This increase has clearly made it easier for law enforcement to not only disseminate the images captured on these cameras, but they have also allowed more good citizens to view the footage and provide information necessary to the timely capture of crime suspects.